The Future of Blockchain Gaming on Solana The blockchain gaming industry is one of the most promising technology sectors today. However, what’s lacking are games that can get people to really get excited about blockchain technology.

It all starts with this problem:

Many games are centralized around the ‘token economy’ model, which prevents us from finding accessible ways to tackle more lucrative and sophisticated blockchain gaming problems.

Solana’s goal is to change how the existing gaming industry operates by doing something differently. This article will discuss the current state of the industry and Solana’s potential to revolutionize blockchain gaming.

According to Fortune Business Insights:

Here’s what that tells us:

The mobile gaming market demonstrates unprecedented growth due to the development of 5G technology and more people owning smartphones.

International gaming markets show different patterns, and it is crucial to be aware of these differences and their impact on players’ demand and spending habits.

Take this tidbit, for instance:

Developing nations often contribute to a relatively high volume, but this is often at the expense of low average spending per user (ASU).

As a result, some game developers focus on mass adoption and volume rather than attracting higher-paying players by creating continuously evolving gameplay.

Now, let’s look at this table by Newzoo. 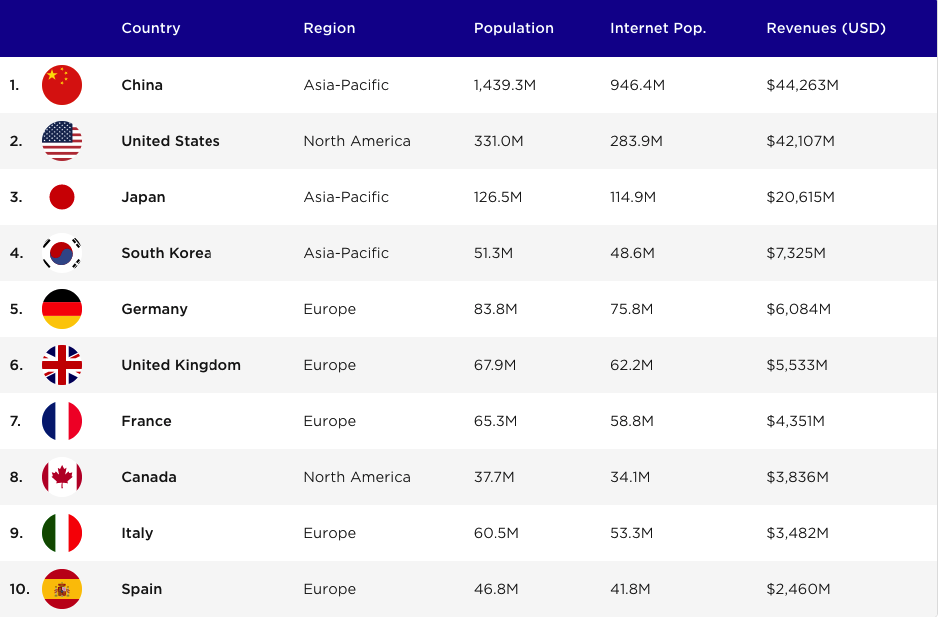 This shows that countries like the United States, Japan, South Korea, and some EU countries have the highest game revenues per capita of the internet population. As a result, these markets have the highest potential for attracting and retaining high spenders.

Moreover, there are about 2.6 billion gamers across the globe. They are constantly looking for new ways to have fun and are ready to pay for it.

At this point, we notice this issue:

The current blockchain games do not appeal to this audience, mainly attracting gamers from the developing world who see them as their secondary or even primary source of household income.

The geography of crypto

Following the top spenders in the gaming industry, it makes sense to look at the geography of cryptocurrencies.

Compared to the rest of the world, here are the shares of cryptocurrency value received by region for the period from Jul ’20 to Jun ’21. Source: Chainalysis.

North America’s monthly cryptocurrency transaction volume grew significantly during the period studied, rising from $14.4 billion in July 2020 to a high of $164 billion in May 2021 — an increase of over 1,000% — before a slight dip in June.

Well, much of this growth was driven by the growing popularity of DeFi.

But there’s another essential factor to consider:

FTX is among the 25 biggest cryptocurrency services by transaction in North America. Therefore, this concludes that Solana-based projects are being more widely adopted and welcomed by this market, with Solana chosen as the blockchain for Serum, a new decentralized derivatives exchange built by FTX.

In Eastern Asia, FTX is among the ten biggest cryptocurrency services by transactions, indicating very high potential for projects built on Solana to gain popularity quite quickly.

What does it mean for the Solana blockchain?

From the top markets by game revenues, we can conclude that North America, Japan, and South Korea are the markets where users tend to spend the most on gaming per capita.

But something else makes these markets even more interesting for Solana-based games:

They have the highest potential for the adoption of Solana-based projects sooner than other markets, thanks to the popularity of FTX.

What about other regions?

Germany, the United Kingdom, and France represent so far untapped markets for Solana. However, with their average spend on gaming and wide adoption of crypto, institutional investments, and the popularity of DeFi overall, those markets have tremendous potential for attracting high-spenders to Solana-based games.

There is also a significant shift to the NFT and games categories if we look at the new dApps launched from Jan to Sep 2021:

According to InvestGame, ​​Blockchain gaming companies raised $476M in the first half of 2021. 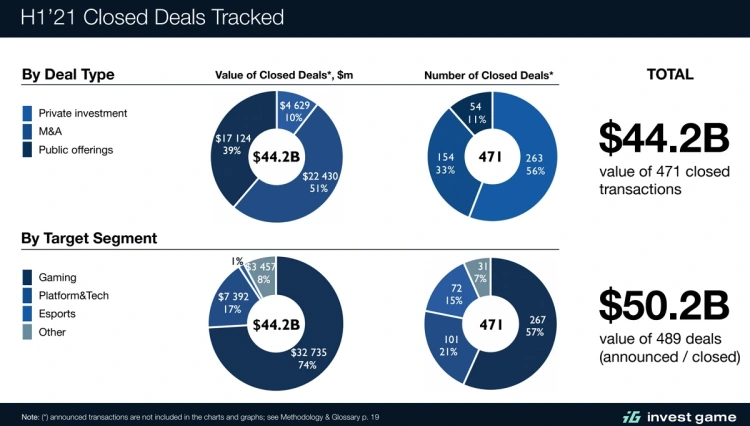 Axie Infinity keeps breaking its own records as the game became the most traded NFT collection ever, surpassing $2 billion in historical trading volume.

According to Sky Mavis:

Axie Infinity’s market cap is more than the market caps of the top 5 game tokens combined:

Other up and coming blockchain games

Let’s start with number one: Splinterlands.

Upland is the runner-up. 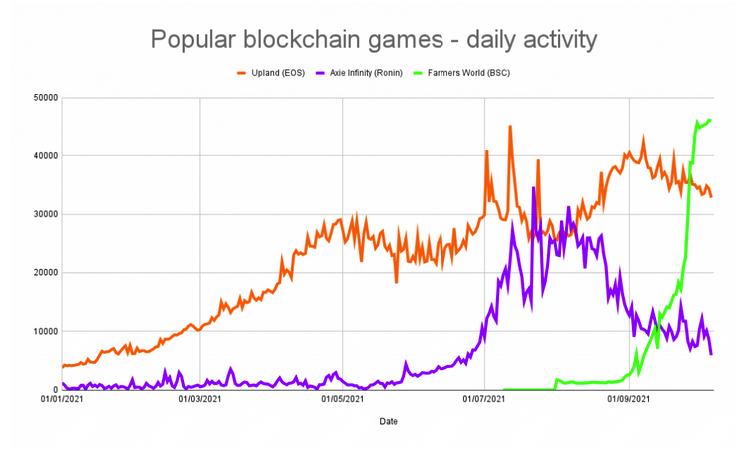 That leads us to this conclusion:

Even with one-third of speculative volume, gaming is the largest NFT category outside of gambling, with $4.3 billion in total NFT volume forecasted by the end of 2021. However, this amount still represents ~1% of the entire gaming industry.

What current blockchain games are missing

With 43% of Axie Infinity players based in the Philippines and others in Venezuela, Brazil, and other developing economies, we can assume that the current top blockchain games target emerging markets for their volume.

Why adopt this strategy?

According to several reports, players from those markets are attracted to the potential earnings rather than the fun gameplay experience. This approach leads to speculations and a lack of diversification as in-game assets are being bought by the revenue generated in-game.

Here’s why that’s a problem:

Despite very high volumes, spendings per player are way below established economies, like North America and Europe. For example, in 2020, crypto players from Asia-Pacific generated $6.9 in revenue per gamer vs. $24,3 generated by each player in North America (+250% difference).

Why Solana is the future of blockchain gaming

The purchasing power of users from established economies shows the need to develop a competitive and fun gaming experience that encourages players to:

These users also need to trust the team behind the game and see it as a part of a large, established ecosystem.

Here’s where Solana comes in.

There is no better blockchain to build a game that appeals to passionate, high-spending gamers than Solana, backed by FTX and large DeFi projects. Despite being a relatively new network, Solana is the winner in the Layer-1 space because:

This is what we propose to do:

We will bring a fully immersive, realistic experience to blockchain gaming by building a metaverse on Solana blockchain for real gamers to enjoy. The Solana ecosystem offers a unique opportunity to create exciting, competitive gameplay that leverages the economic value distributed among creators and users.

Here’s the reasoning behind this solution:

Such a model reduces the need for aggressive monetization or other intrusive practices such as pay-to-join. The goal is to have gameplay superior to existing blockchain games by taking advantage of Solana’s $5M creator fund and the ecosystem of innovative projects built on this blockchain.

And if you need other reasons, take a look at this:

Of course, you may want to see some background data regarding Solana. You can find information about Solana’s established and upcoming projects below:

Solana is a top-performing cryptocurrency of 2021. In June 2021, Solana secured $314M in a new funding round led by Alexander Horowitz to develop more DeFi projects.

Following Solana’s success, many projects on this network manage to secure funding even before the token’s launch.

Here are some established projects:

And some upcoming projects:

Up and coming games on Solana Most games being built on Solana are currently in alpha. However, similarly to other projects on Solana, they succeed in securing substantial funding despite early development stages.

Here are three of Solana’s most successful games:

In conclusion, Solana has all it takes – and more – to conquer blockchain gaming.